Each year, the museum invites a series of speakers to share their unique stories, histories, and insights. This year’s program highlighted a zinc miner’s journey to college president, indigenous history and sovereignty, general overviews of Wisconsin’s mining history, changes in Wisconsin ecosystems since the ice age, new archeological analysis of Rollo Jamison’s oldest collection, GIS in the mining district, and oral history interviews. The weekly programs were broadcast online through Zoom webinar to record-breaking attendance from across the country and even internationally. Below you will find full recordings of all our 2022 presentations.

In this engaging conversation with Dr. James Wright, the son of a World War II veteran and grandson of a miner, we will hear a fascinating story with roots in the Upper Mississippi Valley mining district. This dialogue will explore how Wright enlisted in the U.S. Marine Corps after graduating from Galena High School and returned home to experience a fascinating career trajectory from working as a powderman in the Birkett and Graham mines to becoming an accomplished historian, educator, and president of Dartmouth College. He graduated from what was then the Wisconsin State College and Institute of Technology in 1964 and remains grateful to his Platteville undergraduate faculty mentors for their support and encouragement. 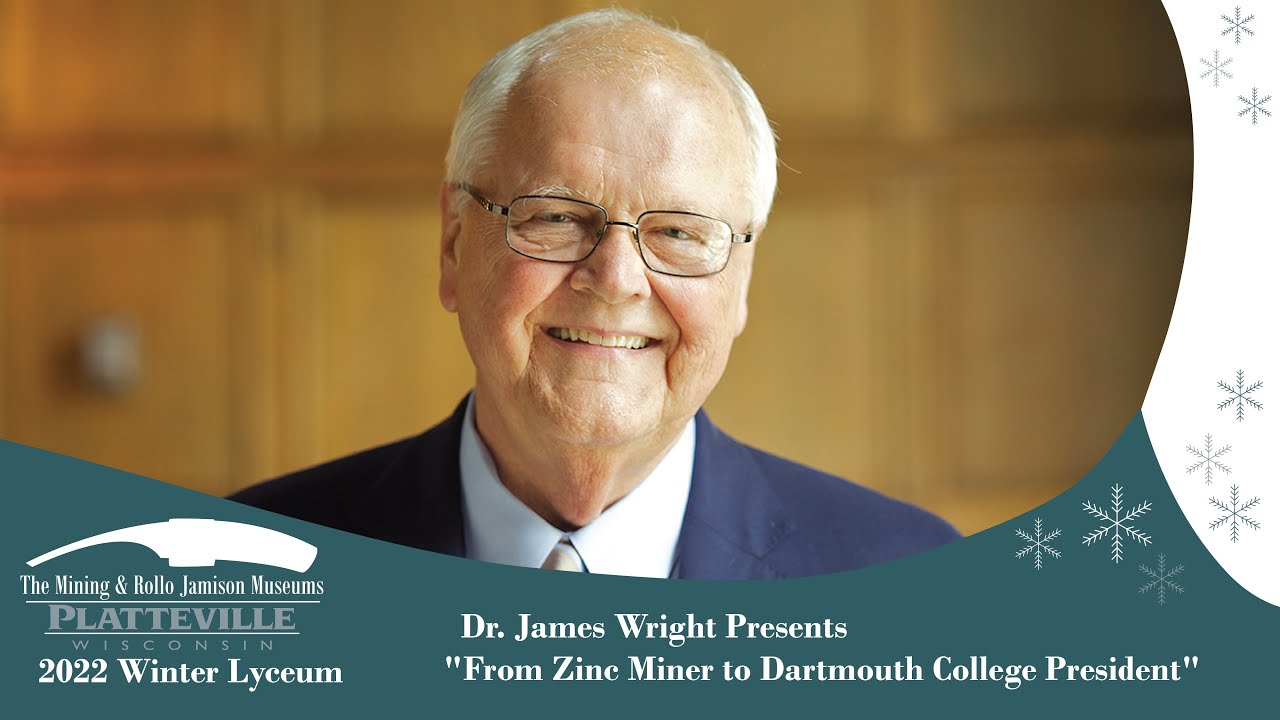 Native American history and African American history have deep roots in the Driftless Region. In this presentation by Dr. Eugene Tesdahl and Dr. Joshua Wachuta, come appreciate the complexities that Ho-Chunk leaders, African American lead miners, and U.S. officials negotiated during the Driftless lead boom, 1825-1848. The region witnessed illegal slavery even as it transitioned from free Michigan Territory to free Wisconsin Territory ending in Wisconsin statehood as a free state. Ho-Chunk leaders including Caaxšépsgaaga, Wakąjawįxka, and Wanįg-sučka sought to maintain their ancestral rights to the lead region, but faced an overwhelming U.S. military occupation after 1827. Enslaved black lead workers Paul Jones and Toby Dodge navigated their way through this period gaining freedom as Wisconsinites along the way.

An Overview of Wisconsin Mining History

Platteville-raised Archivist for the Wisconsin Geological and Natural History Survey, Brad Gottschalk, presents an overview of the history of mining in the state of Wisconsin. Not limited only to the Upper Mississippi Valley Lead-Zinc District, mining in the state has included development of Banded Iron Formations, Volcanogenic Massive Sulfides, silica sand deposits and more 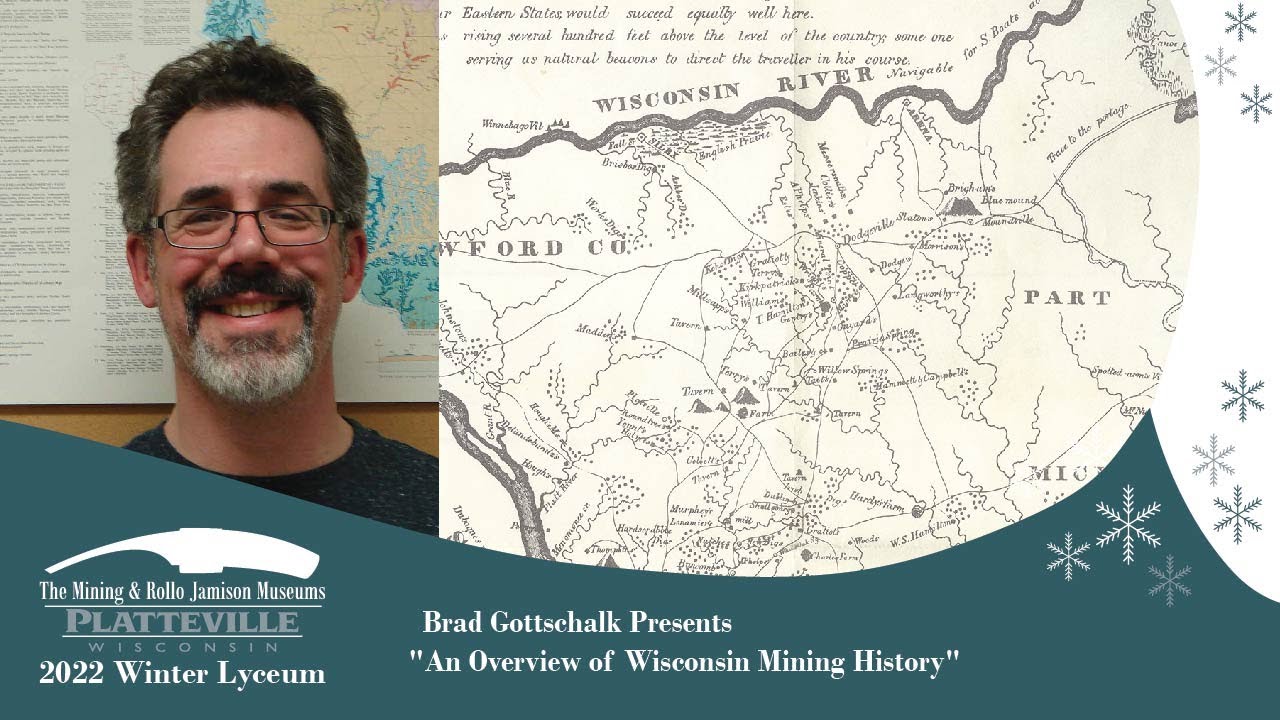 Changes in Wisconsin Ecosystems and Environments Since the Last Ice Age

UW-Madison geography professor Dr. Jack Williams paints a picture of the ecological upheaval of the North American landscape just after the retreat of the ice sheets 15,000 years ago. Recent research using fossil pollen, charcoal and dung fungus spores help us visualize a post-ice age terrain different from anything in the world today. The disappearance of mammoths, giant beavers, ground sloths and other large animals preceded a massive change in plant communities, providing new insight into the dynamics of extinction and its pervasive influence on a given landscape. 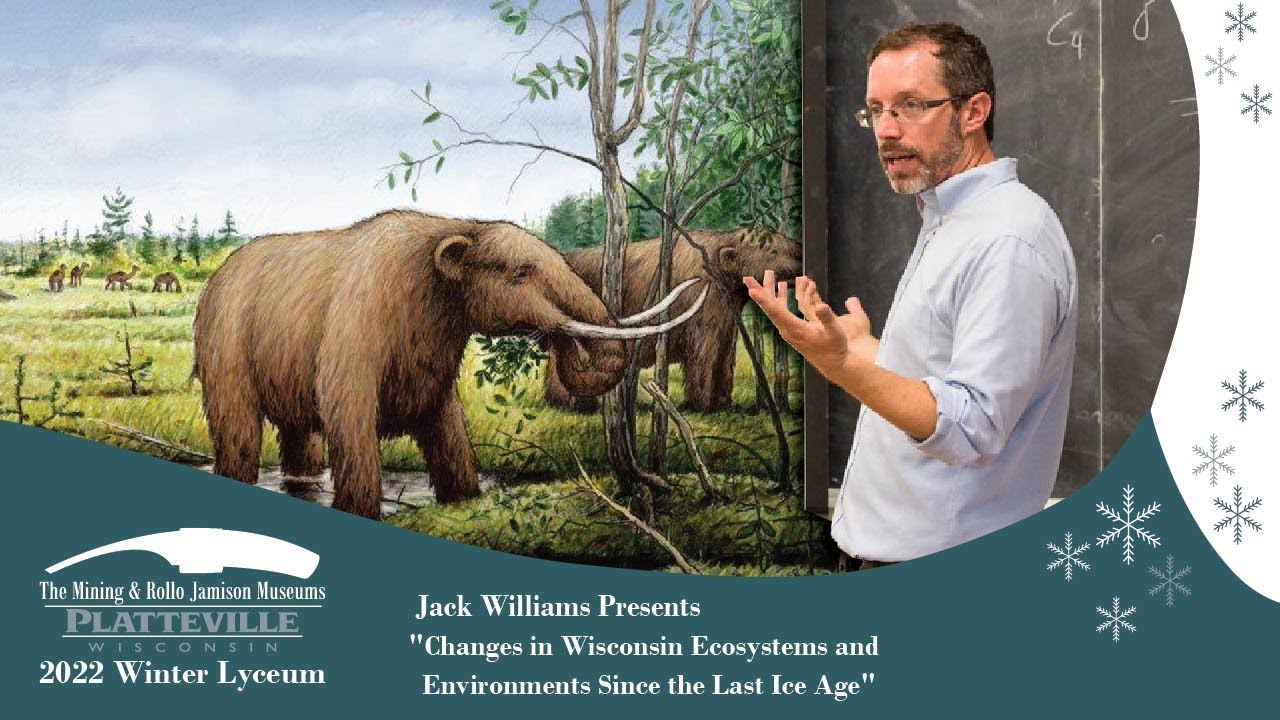 In conjunction with unveiling a new analysis of nearly 1,200 Native American stone tools in the collection of The Mining & Rollo Jamison Museums, a panel of archeologists will reveal how stone tools were made in this nook of the Driftless Region, and how the museum collection demonstrates the ingenuity of native peoples who inhabited this area through time. From the end of the Ice Age though the period of European contact, Native Americans crafted tools in response to changing natural and cultural environments. The materiality and design of implements were adapted to different flora and fauna over time and for each season. A flintknapping demonstration and sneak peek of a new museum exhibit (supported in part by a major grant from Wisconsin Humanities) will be included. 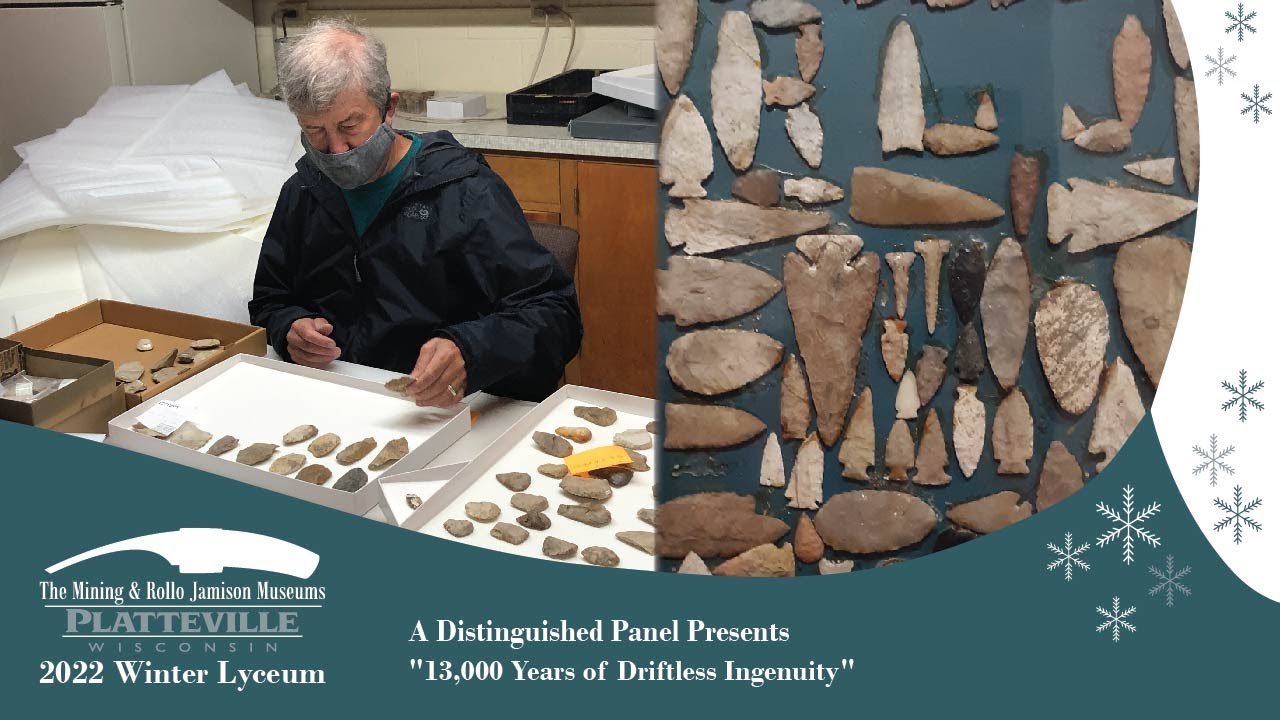 Dr. Nancy Von Meyer, who began her career in Platteville as a mining engineer and went on to become a pioneer in the field of digital mapping, presents her insights into the Geographic Information Systems (GIS) in the Tri-state area’s Upper Mississippi Valley Mining District. She will also explore public mapping, and will help identify GIS data and maps that would be useful for museum enthusiasts. Nancy von Meyer is an expert in GIS and land records and is the president of Fairview Industries, where she has solved many problems related to land records. 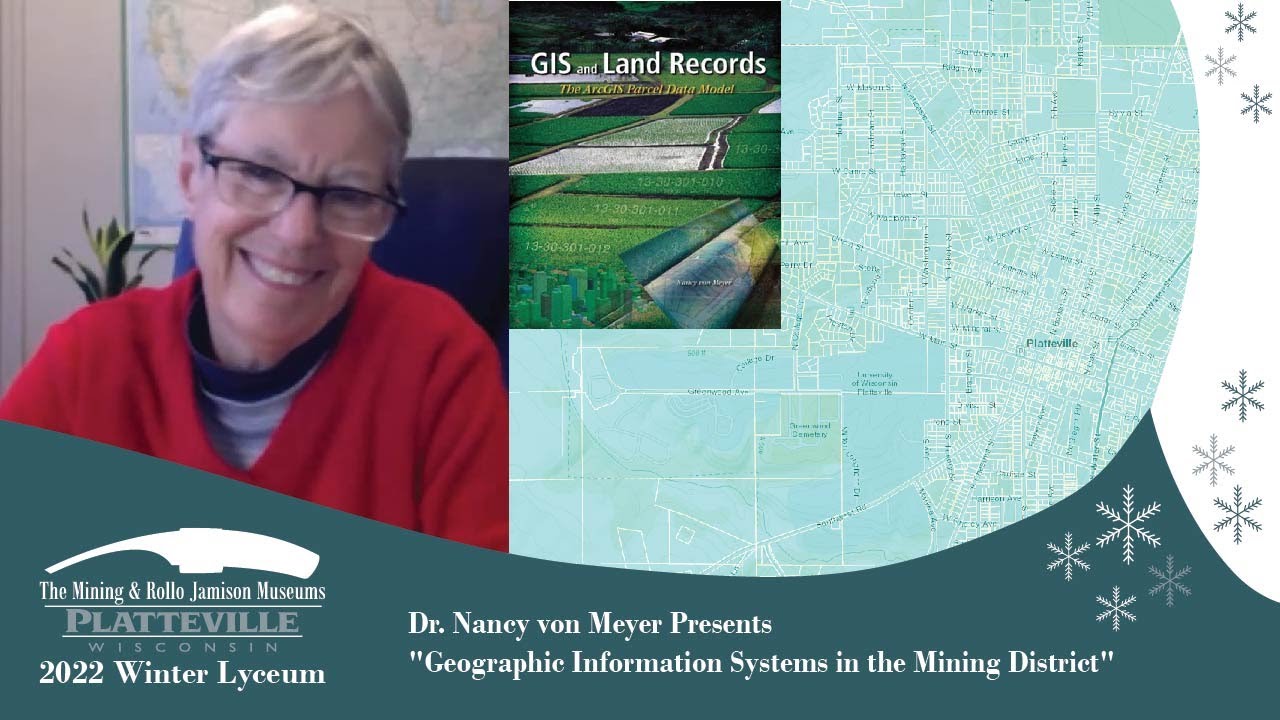 This talk by Luke Sprague, Oral Historian for the Wisconsin Veterans Museum in Madison, is a quick beginner’s-level training for people who want to conduct oral history interviews. There are three parts to the talk, and we will cover all three in brief. Part one covers the theory, ethics, and principles of conducting oral history interviews. Part two explains the pre-interview processes and the interview guide development. Part three reveals some good interview techniques. 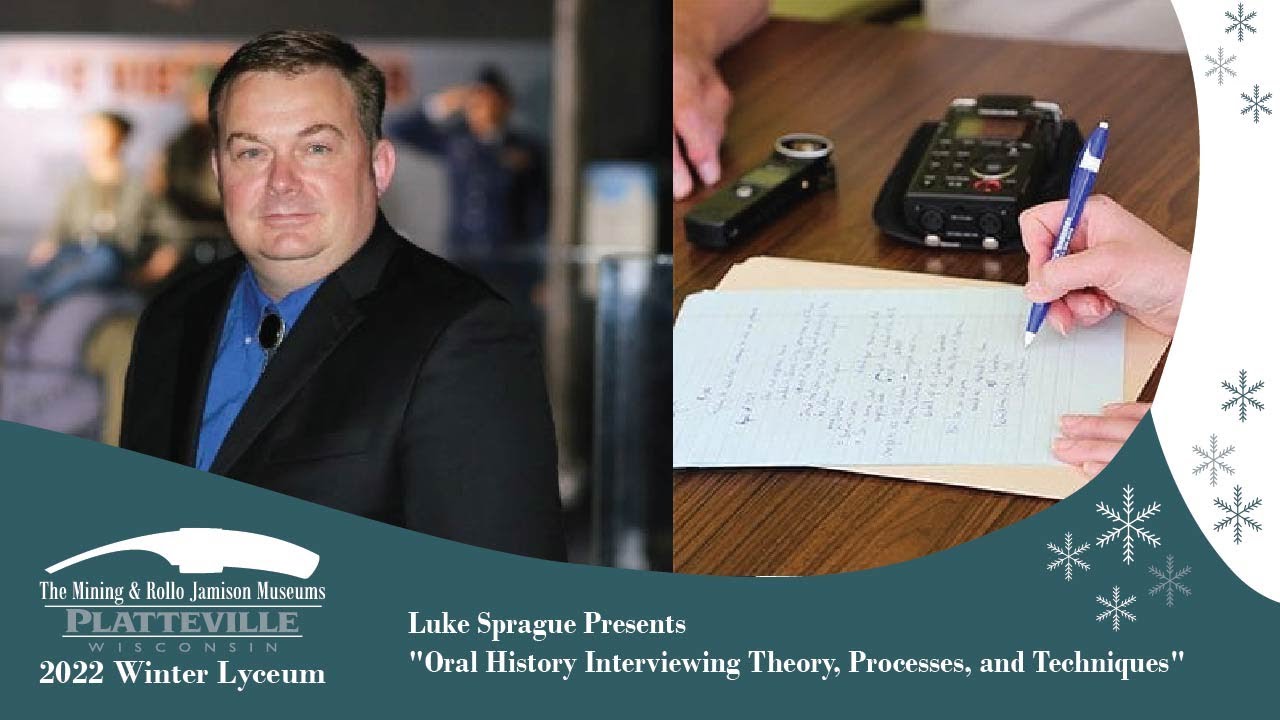